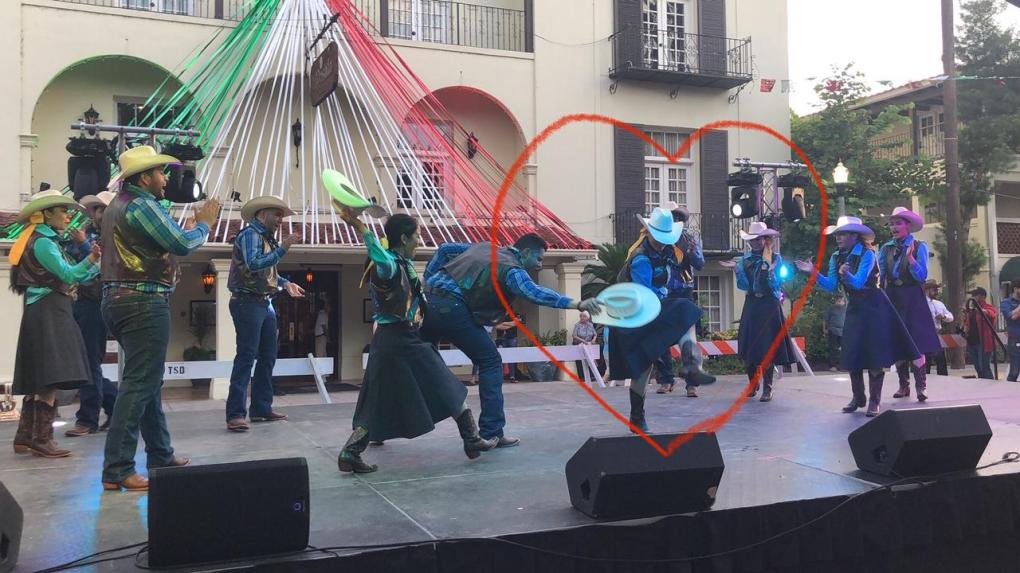 Rafael Zamarripa Castañeda founded the Ballet Folklórico de la Universidad de Colima in 1981. He has choreographed many dance suites. Yet, it is his development of a folklórico technique called Técnica Raza that is my favorite of all his contributions. I learned elements of Técnica Raza from him at the Asociación Nacional de Grupos Folklóricos (ANGF) conference in 2002. Here, dancers learn sophisticated folklórico zapateado sequences that utilize the heel, toe, and entire body as they travel across the floor. Designed to increase spatial awareness, enhance motor ability, and especially encourage clear zapateado footwork sequences this technique is a wonderful tool for dance training (Director’s Class ANGF Dance Workshop, June 29-July 6, 2002; https://www.tecnicaraza.com/founder).

Amalia Hernández founded the Ballet Folklórico de Mexíco in 1952. (Aguirre and Escalona, 1994, 16-42). One of Hernández’s most famous choreographies depicts the Mexican Revolution (1910-1920) using song and dance. Hernández choreographed this suite based upon her own family stories. It is very close to her heart. In this iconic dance piece she utilized the corridos of the era. The corridos are musical ballads that sing of the heroes/heroines of the war, love lost and found etc. She usually begins La Revolución showcasing the aristocrats dancing the ballroom dances of the epoch. Then, the revolutionaries or peasants interrupt the scene carrying rifles while the aristocrats rush off stage. The music changes to the corridos of the time period alongside dancing which has intricate footwork and skirt work elements (Ballet Folklórico de México de Amalia Hernández: Sesenta y Cuatro Aniversario).  Of this suite one of her most beloved is a tribute to the soldaderas called Las Adelitas. These women who fought along men in battle during the Mexican Revolution are depicted as strong, brave, and fierce. So many folklórico groups in Mexico and the United States have followed her lead in depicting the dances and soldaderas during the Mexican Revolutionary War.

We cannot forget the contributions of Kinesiology teachers in the 1920s and 1930s who were sent by the Secretaría de Educación Pública to rural communities to teach. The Cultural Missions consisted of a group of teachers in different disciplines plus a social worker to rural areas where public education was lacking. Flores de Angeles was a part of one of these missions. She remembers teaching physical education classes to all. In addition, she was instructed to collect the dances of the rural people. She was sent to Chiapas, Mexico in San Juan Chamula. At the time she was a single mother because her husband had recently passed away. While her son was living with his grandmother, Flores de Angeles traveled with this group of educators to teach. She is most famous for learning El Bolonchon during the festival of the Virgen de Asunción. She choreographed it for the stage. These efforts mark the very beginnings of the folklórico movement that we know of today (Mendoza-García, 85-102).

In the 1960s in La Misión, Baja California, Mario Ramón Reyes Meléndez spoke with the elders of this community who stated that the varsouvianna, polka, and shotis were the traditional dances of this region. Yet, he noticed that in this community the youth danced calabaceados (Valdovinos García, 125-126). These dances are performed by cowboys and cowgirls to musica norteña. They dance with much flexibility kicking their legs in the air and stomping the heel of the boot on the floor (Martínez Tadeo, 41-42). In 1979, Mario Ramón Reyes Meléndez organized the first festival called La Fiesta de la Misión in La Misión, Baja California. Here, the youth danced calabaceados. In 1982, he invited Juan Gil Martínez Tadeo to choreograph these calabaceados for the stage. In 1991, Martínez Tadeo started El Grupo de Danza Folklórica Kicukpaico and they performed a dance suite representing the calabaceados of La Misión, Baja California. According to Raúl Valdovines García in El Baile Calabaceado: Tradicion de la Fiesta de Vaquero (2017), calabaceados were not considered part of the folklórico repertory for a long time. It was until Martínez Tadeo choreographed these dances for the stage, that they gradually were adopted into the folklórico repertoire of companies in Mexico (17, 21, 37, 126-127, 129-131). I know it is hard to imagine the folklórico community without the calabaceados because they have become a part of the identity of the people of Baja California.

The book Dancing Throughout Mexican History (1325-1910) written by Sanjuanita Martínez-Hunter and edited by myself is available for purchase on amazon. Please click on the link below.