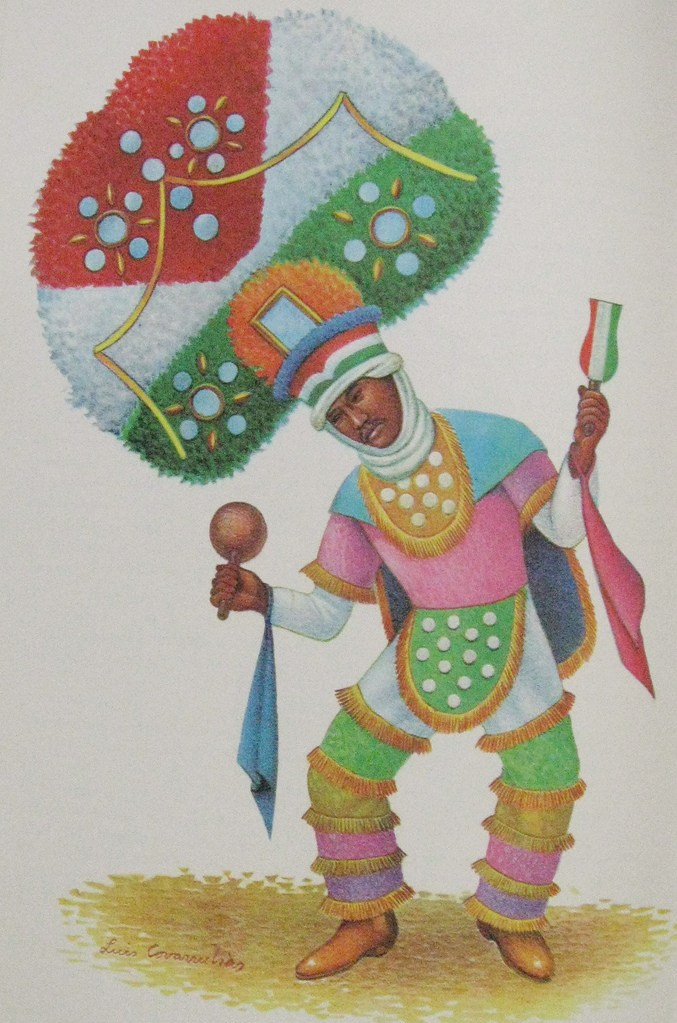 Contrary to stereotypes that depict Mexicans as passive, our ancestors were anything but. When faced with political, religious, and cultural conquest, they fought back.  Hidden within the dance-dramas of Mexico such as: Los Moros y Cristianos, Los Santiagos, La Danza de la Pluma, and La Conquista our dancing continues to preserve the ancient traditions of our ancestors including their opposition to Christianity and conquest.  Outwardly, these dances seem to promote the Christian themes encouraged by the Spanish conquerors, yet to those “in the know” these dance-dramas had a deeper meaning. The following is an excerpt from the book Dancing Throughout Mexican History (1325-1910) written by Sanjuanita Martínez-Hunter and edited by myself.

A dance of welcome, “The Feather Dance” reportedly came from various Aztec legends about Quetzalcóatl, the plumed serpent-god who had vanished but promised to return eventually. This deity’s symbolic bird, the quetzal, furnished the elaborate plumage for both royalty and priests. In spite of his beard and moustache, Cortés, who had light hair and fair skin, was believed to resemble the Quetzalcóatl.[1]

Features in the costume suggest the figure of a spectacular, crested bird, Quetzalcocochtli, “the bird that sings at dawn.” The crested bird portrays an image of the deity Macuilxochitl “whose feast, Xochilhuitl, festival of the flowers,” continues to be celebrated in Oaxaca. According to Luis Covarrubias, Mexico’s leading costume and dance historian, this costume feature and other details in La Danza de la Pluma confirm that this dance probably was derived from a ritual honoring Macuilochitl, the god of song, music, dance, and court nobility.[2]

The Feather Dance” mimics the theme of the “Christians and the Moors” in depicting Moctezuma as the good in conflict with Cortés as the evil.[3] The characters of La Danza de la Pluma typically include the historical figures of Moctezuma, Cortés, Malinche, Cehuapila (Montezuma’s princess), Icotil, and Pedro de Alvarado (a Lieutenant of Cortés who ordered the massacre known as the noche triste).[4] These characters depict the historical events which occurred during the Spanish Conquest of Tenochtitlán, the Aztec capital. The opening scene shows Moctezuma and Cehuapila as resisting the Spaniards; this is followed by a grave battle which results in the conquered Aztec king being imprisoned. In the dance intervals, pantomime and dialogue are presented.[5]

Focusing on the costume and dance details of this drama, Luis Covarrubias perceived the vestiges of an ancient ritual: for instance in the dance, the solemn bowing in the introduction to each of the four cardinal directions and the cordate scepter grasped in the dancer’s left hand; and in the costuming depicting a bird, the huge headdress trimmed with mirrors and adorned with plumes, the brilliantly hued cape, the pantaloons with silk bands and gold fringe, and the apron bedecked with medals and coins of silver. From such evidence, Covarrubias concludes that the dance’s “modern significance is only a disguise for an ancient ceremonial rite.” [6]

These historical and martial dance-dramas intertwined with Christianity afford the Mexican people an opportunity to “develop a positive image” of their Indigenous heritage.[7] Furthermore, these dances provide an expression of the antipathy that was and continues to be expressed toward the Spanish conquerors and rulers. In comparing the masks and costume of the Indigenous people to the Spaniards the empathy toward the Indigenous plight is obvious.  Beautiful costumes help characterize the Indigenous people as dignified; while ill-fitting, tasteless costumes characterize the Spanish conquerors as brutes.[8]

The preceding excerpt has been shortened to fit this blog. For more information please read the book Dancing Throughout Mexico (1325-1910) as written by Sanjuanita Martínez-Hunter and edited by myself.  This writing was completed in 1984 by Martínez-Hunter to  fulfill the requirements needed to complete her doctoral degree. Never having a chance to publish it in her life-time, I have done so after her passing. It is published in honor of her contributions. The book will be released shortly. It will be available for purchase on Amazon. Please be on the look out for it.

[1] Rosa Guerrero, “Value Clarification of the Chicano Culture Through Music and Dance,” Lecture at a symposium sponsored by the Texas Committee for the Humanities and Mexican American Studies Program at the University of Houston Central Campus, 1979.

2 thoughts on “Folkloric Dance as a Form of Resistance”